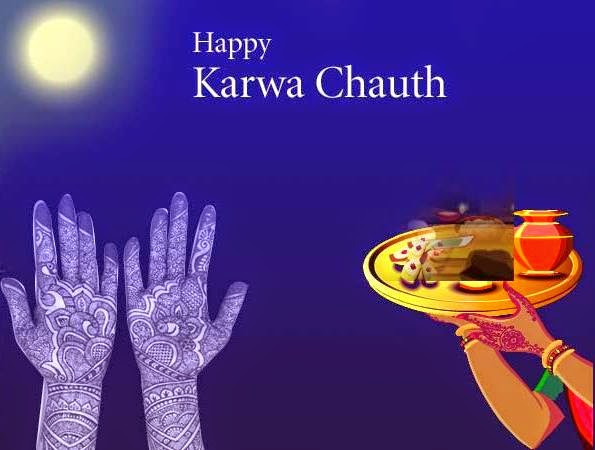 Some people were joking narrating an incident about karva chauth and I overheard it which had really saddened me. A wife badly waiting for her husband to come as moon has appeared in the sky. All the ladies have come up on their terrace to worship moon along with their husbands. Wife calls her husband. After ignoring so many of her calls finally he replies to her call and questions hastily. What’s the matter? Why are you calling me again n again? The wife is quick to retort that she fasted today and it is his parents who forced to celebrate this festival. They are only to be blamed for causing her and themselves all the discomfort. This way the call ended and the charm of the festival disappears. This shows So much for the spirit of celebration!

On another note I have seen many the couples for whom karva chauth is more than a festival. They celebrate the every moment of this day by showing so much love, care and bonding to each other. In some of the cases the husbands have also kept this fast for their wives’ so that she could live a healthy and a long life, such should be the feeling in every men of equal participation. In-fact it is quite recommended for the men to pitch in which makes it a much more enjoyable experience for everyone. While for wives it’s a day of dressing up as a new bride.

Celebrating Karva chauth, married Hindu women observe a day-long fast for the long life of their husband. Women carry out this meticulous fast with full devotion and enthusiasm. By observing Karva Chauth vrat, women express love for their husband and rejuvenate their married life. In modern India, Karva Chauth is more like Valentine's Day for married couples - a day to express love and re-affirm marital vows. It is interesting to observe that the popularity of age-old festival of Karva Chauth is rising every passing year. Even in today's jet fast age, modern Indian women have maintained their faith in ancient Indian scriptures and tradition. Modern day women observe the fast by carrying out all the prescribed rituals with full devotion.

On the day women keep fasting whole day. In Punjab there is a trend of eating sargi before sunrise but in other parts of Northern India it's not so. For the whole day female keep fasting for their husbands. Women perform puja and listens the story of Karva Chauth. They complete their rituals which symbolizes asking for the same husband for seven lives. Apart from all these, any Indian festival is never complete without exchange of Gifts. After performing all the rituals, women receive expensive and unique gifts from their husbands. The market offers a wide array of Karva chauth Gifts to lure your wives on this special day. Sending Gifts on this occasion is a way to convey that you love and care for her. This shows the glorifying face of Karva Chauth.

So Why not make this Karva Chauth, a day of special feel by spending some quality time together with your better half to the milieu of all the festivities. Revive the romance by promising to have your relationship work better through investment of fresh energy and time on a regular basis as a couple.
Posted by Tricity Calling at 22:29 No comments:

Nine Days of Most Sacred Nights

Besides Diwali, Navaratri is the most celebrated festival in tricity. The festival is devoted to Goddess Durga which marks the beginning of the festive season.  Temples are heavily crowded by the pilgrims who almost come on their feet to thank their goddess to fulfill their wishes.  These sacred nine nights are dedicated to the Mother Goddess Devi, who is the Shakti or power of all our deities.

There is one more belief of people in tricity that story of sati is also dedicated to this festival who is also known as UMA, the daughter of King Daksha. Uma married Lord Shiva against the wishes of her father. One day Daksha organized a huge yagna and invited all the gods and deities except Lord Shiva. When Uma visited her parents to take part in the yagna, her father offended Lord Shiva. Unable to bear the insults meted on her husband, Uma jumped into the agnikund, which is why she is also known as Sati. In her rebirth, she married Lord Shiva and also made peace with her parents. It is said that Sati comes to stay with them for nine days, which is celebrated as Navratri. 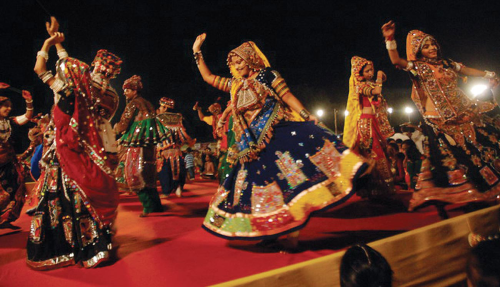 There are two Navaratris celebrated every year, one in spring and the other in autumn when people fast and pray for her blessings. But these navratras are more celebrated as during these nine days and nights the many aspects of the Devi are worshipped, with the celebrations ending on the day Dussehra. The people of tricity have brought culture of Gujarat here by dancing the dandia during these days. Dandiya functions are organized at many parts of the tricity but major one is always held at kalagram, Chandigarh.

Devi is the consort of all the gods. She is Parvati and Durga, the consort and Shakti of Lord Shiva. She is Lakshmi, the Shakti of Lord Vishnu and Saraswati, the Shakti of Lord Brahma. The nine most sacred forms worshipped at this time are of Durga, Bhadrakali, Jagadamba, Annapurna, Sarvamangala, Bhairavi, Chandika, Lalita and Bhavani. She is the generous Annapurna bringing food to people and the warrior goddess Durga battling evil, the ascetic Bhairavi and the gentle Lalita.

During these nine sacred days and nights the consumption of food items such as meat, onion and garlic lowers in the tricity while buckwheat (kuttu ka atta) and samak rice (an alternative to the sinful basmati) became ingredients which are cooked at homes. Now that has obviously changed, with people heading out to restaurants to fill up on traditional Navratri fare.

While still sticking to saatvic belief, several restaurants of tricity have started to add variety to their offerings. Restaurants like Anupam sweets are now layered with many navratra dishes such as buckwheat, honey chilly potatoes tossed with peanuts, carrot fried Samak rice, lychees and sago in coconut milk.

With lot of hustle bustle in the market for upcoming events tricity is all set to get decorated.  People across the India had made this place a hub to enjoy the every Indian festival.
Posted by Tricity Calling at 03:56 No comments: